In the Latin Church the pipe organ is to be held in high esteem, for it is the traditional musical instrument which adds a wonderful splendor to the Church's ceremonies and powerfully lifts up man's mind to God and to higher things." (#120)

Immaculate Conception of the Blessed Virgin Mary Roman Catholic Church of York was established in 1852, and the pipe organ in the first church, which was dedicated in 1853, was built by the Pomplitz Organ Company of Baltimore, MD.  We do not know the specifications of that first organ but from a newspaper article we know that a Professor Hermes gave a recital on the organ, spoke well of its tonal quality and said that "it decorated the church not a little”.

The present church was constructed in 1884 and a new organ was purchased for that church.  The following news articles give an insight into the acquisition and installation of the new organ. 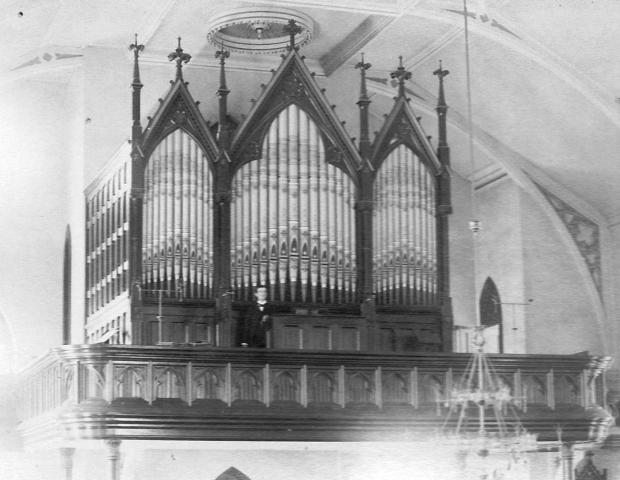 The Organ Committee of St. Mary's Catholic Church are about negotiating with a Baltimore firm for a $3000 organ.  There are many large and costly organ in York, but the organ about to be purchased for St. Mary's, it is said, will be larger than any of them.  It will not be perhaps, as handsomely ornamented as some of them are, but it will be of much greater compass.  The committee are now engaged in collecting money for this purpose, and last week collected over $700. ~  The York Democratic Press  February 13, 1885

Rev. J. George Pape, Messrs. Henry Boll, Anthony Munchel, Ed. Reineberg, Henry Crouse, and B. A. Baecher, acting as a committee appointed for that purpose, yesterday purchased a $3000 organ of the Baltimore Organ Co.  The organ is a fine instrument, and is expected to be placed into position by Whitsuntide Sunday, July 23.~ The York Daily   February 13, 1885

The new organ is now completed and put in position.  The organ has a very fine appearance...it is 22f high, 18f wide, and 15f deep, consists of 1091 pipes, has 23 speaking registers and 10 octaves.  The programme will appear this week.  As the proceeds of this musical treat will be applied to pay for the new organ no doubt our benevolent citizens will appear in great numbers in St. Mary's Church on Thursday, July 23. ~ The York Daily  July 20, 1885

That first installation proved to be something less than successful.  Since all the pipes sat in the room above the vestibule, in the center bell tower, the sound was muffled and not at all what was expected of this large organ.

The organ loft was extended and 4 pillars were required to support the new gallery. The entire organ was then moved out of the center bell tower and the wall opening that was the front of the organ was now closed up and became the back of the organ chamber.  An enclosure was built by the Pomplitz Co to encase the organ in its new location.

Between 1886 and 2009, several changes were made to the organ. The first major change came in the 1930's when the Gundling Co. of Lancaster converted the organ from it's mechanical tracker action to the electo-pneumatic action.

A rupture in a steam pipe in the basement of the church in the 1970's caused the organ blower to pump the hot moist air into the windchests, ruining most of the leather in the windchest pneumatics. The chests were releathered and a new “English style” blower was installed in the room behind the organ. Also, at about this time, a family contributed funds to install chimes in the organ.

By the turn of the new millennium, notes were beginning to either cypher (stick) or not sound at all.  The parish council contacted several organ companies to request proposals to overhaul the organ.  Several options were submitted from releathering those chests that were failing, completely redoing all the chests or a complete rebuilding and restructuring of the instrument.  The parish council elected the third option and selected the proposal of the SDG Organ Company of Millersville, PA.

Immediately after the 2008 Christmas season, SDG Organ Co. removed the entire organ with the exception of the front facade pipes and the 16 foot double open diapason rank.  They also opened the back wall where initially the front of the 1885 organ sat so it was possible to look up to the choir loft and see thought the front pipes all the way to the stained glass window in the front of the center bell tower.

When SDG Organ Co. reinstalled the organ, it was almost a completely new instrument. It went from 14 ranks  to 21 ranks but remained in three divisions.  The pipe sizes range from 16 feet to ¾ inch in speaking length.  It has all four organ pipe families, flutes, diapasons, strings and reeds.  It includes the chimes that were installed in the 1970's.  The new swell chamber extends about 2 to 3 feet back nto the center bell tower.  The basic organ specifications are listed below.

The specifications of the organ are:

Each division is equipped

with one MIDI stop control

NOTE: (*) rank includes all or some pipes from the previous organ.